Finish: Original military finish was either parkerized or a gray oxide coating. In the 1970s some CZ-52s were arsenal refinished blue.

Operating controls of the CZ-52 include a single-action trigger, an external hammer, a magazine catch at the heel of the grip frame, and a combination de-cock and safety lever on the left side of the receiver behind the left grip panel.

The manual safety blocks movement of the sear, preventing the hammer from releasing and so firing a round. A second safety in the form of a spring-loaded firing pin block prevents the pistol from firing unless the trigger is pulled to the rear, rendering the pistol "drop safe". Because the sear must also overcome the additional spring pressure of the firing pin block, an unusually heavy trigger pull results. 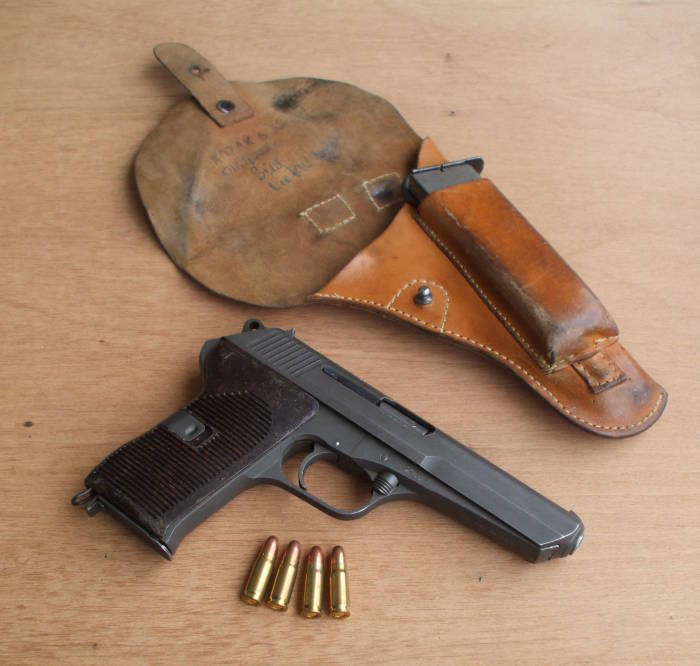 The trigger pull of a stock CZ-52 is often in the range of 8-10 pounds. Our replacement firing pins and drop-in trigger enhancement kits can lower this to 3.5-4 pounds, a feel preferred by many shooters and which can lead to greatly improved accuracy.

The hammer is of the rebounding type, meaning that it does not contact the firing pin while in its uncocked position and cannot do so unless the trigger is pulled, another safety feature.

Load the weapon by inserting a full magazine and then retracting and releasing the slide. This will cock the hammer, strip a cartridge from the magazine and chamber it.

Rotating the safety lever fully downward, exposing a red dot between the receiver and hammer pivot pin, renders the pistol ready to fire.

Rotating the safety lever upward to cover the red dot engages the sear block (for "cocked and locked" carry).

Rotating the safety lever fully upward decocks the hammer by releasing the sear and intercepting the hammer's rotation. The hammer must then be cocked manually and the safety disengaged before a round can be fired.

How the CZ-52
rollers work

This is similar to the system used in the German MG 42 machine gun which itself was based on a Polish patent of the 1930s. The mechanical design results in an unusually strong lockup allowing ammunition to be loaded to higher pressure levels (and therefore, higher velocity and energy) than other physically compatible ammunition.

When a shot is fired, the barrel and slide recoil together while the cam block is held stationary by a lug in the receiver. After traveling rearward a short distance (about 4 mm or 0.16"), the rollers are allowed to disengage from the slide via recesses in the cam block. The slide is now free to continue rearward, cocking the hammer, extracting the spent case from the chamber and ejecting it clear of the pistol. After reaching the end of its stroke, the slide is returned to battery by the compressed recoil spring, again collecting a fresh cartridge from the magazine and chambering it.

This means that magazines do not drop free and occasionally take a few seconds to remove from the pistol. Releasing the slide catch is done by removing the empty magazine (or inserting a loaded one), retracting the slide and releasing it. There is no thumb-operated lever to release the slide (though an aftermarket slide release lever is available).

Harrington Products plans to produce modified slide releases — check back to see when they become available.