The ČZ vz. 52 pistol is a popular surplus firearm, but bear in mind that they were manufactured in from 1952 through 1954. That's plenty of time for springs to weaken and change its behavior.

Trigger slap is a term for an unwanted form of sharp recoil caused by a weakened recoil spring. Wolff Gunsprings sells a variety of ČZ-52 recoil springs. The factory standard is 14.5 pounds, their stronger springs are rated at 16.5 and 18.5 pounds.

When the gun is fired, the rollers unlock by retracted into the roller cam, allowing the slide to move toward the rear. The recoil spring acts against that motion, decelerating the slide as it moves back.

Eventually the slide reaches the stop limiting its backward travel, and the recoil spring returns the slide to its in-battery position, stripping a fresh cartridge from the top of the magazine (or, if the magazine is empty, the slide is locked open near its maximum rearward position).

If the recoil spring is weakened, the slide is not decelerated as much as it should be and it strikes the mechanical stop with a sharp blow.

With a good spring, the recoil should consist mostly of a nearly constant firm force as the slide is decelerated, with a small impulse at the end of its travel.

With a weak spring, the initial recoil during the slide movement will be lighter, but then the strike against the mechanical stop will be quite sharp.

Here is an attempt to plot the perceived force during the cycling of the action for one shot.

There will be a large immediate impulse when the round is fired. The rollers have locked the roller cam in place and so the impulse will be felt by the shooter. 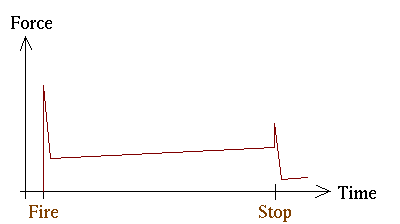 If the recoil spring is weak, the slide will not be decelerated appropriately. The force felt by the shooter will be less during the slide travel, and the slide will strike the mechanical stop sooner and with greater force, transferring a much more pronounced impulse. This is the "trigger slap". 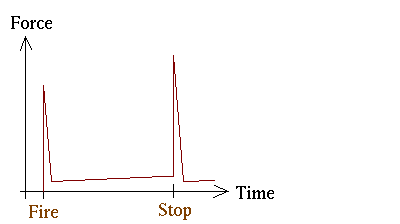 Here you see a rather basic experiment. The slide has been clamped in a portable workbench. Small pieces of leather, the result of cutting apart a cheap set of work gloves, protect the slide's finish.

A takedown tool has been inserted into the roller cam. A variety of iron weights is sitting on the workbench. You can probably guess where this is going... 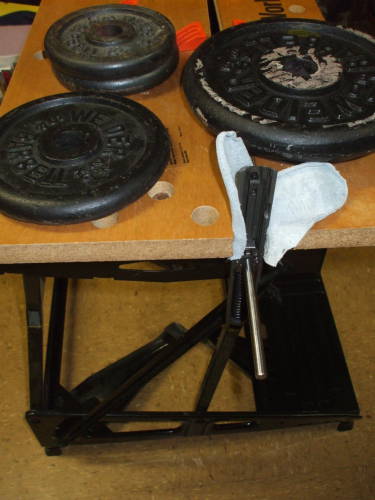 Be careful if you attempt anything like this! Wear eye protection.

The recoil spring can easily launch the barrel across the room once you compress it far enough to disengage the rollers from their track.

Various combinations of weights were tried. 11 pounds (5 kg) has been placed on the takedown tool here. once you unlocked the roller cam, the downward force of 11 pounds of weight was almost exactly offset by the upward force of the spring. A light touch with your hand moved the weights down. With 10 pounds it took a stronger push, and with 12 pounds the weights dropped on their own once the rollers were unlocked.

It's not clear how Wolff defines their spring force. For example, their 16.5 pound spring: how much will a 16.5 pound force compress that spring?